About us & history outline

Desarrollos Geológicos (GEOSA) was born as a company dedicated to the execution of drilling works and special projects for the mining industry. It subsequently expanded its activities into the field of civil engineering and particularly into the execution of pipe-jacking works (microtunneling).
Nowadays our company’s production line has two divisions that carry out mining and civil works.
Being a company specialized in drilling and pipe jacking, out main activities are:

Using highly qualified equipment and human teams, since 2002 we have completed over 50,000 m. of pipe jacking in the field of civil works. That proves our experience, productivity and reliability.

GEOSA is part of a group of companies (GRUPO CARBOMEC) firmly stablished, developed and constantly growing in the fields of underground mining (infrastructure and exploitation) and civil works.
GEOSA’S activity relies on quality and environmental policies with an incorporated health and security system. 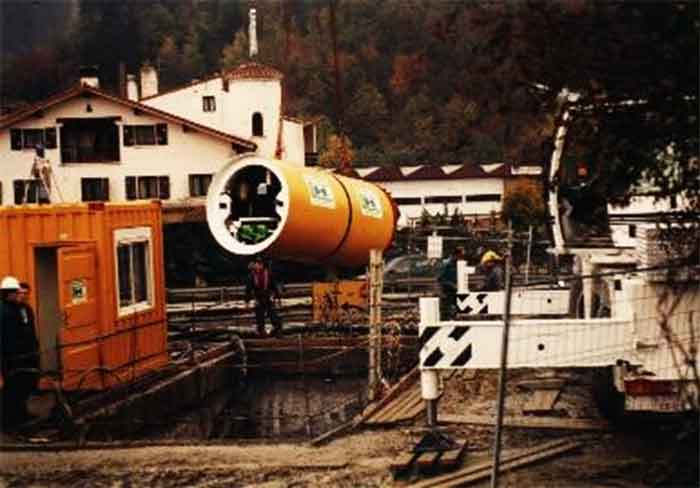 DESARROLLOS GEOLÓGICOS (GEOSA) was born in 1991 as company specialized in drilling and special mining projects (mostly underground).
It has carried out multiple works in this field (reconnaissance drilling, large-diameter drilling for ventilation, drainage, gravity transport, etc.) as well as special mining structure works, particularly underground dump pits and steep inclined planes. All these works usually require the use of some drilling technique. For instance, GEOSA has pioneered the execution of steep slopes in a previous raise boring drilling using the downward extension method, instead of the traditional ascending cul-de-sack procedure.
From 2002 on the company has extended its activity into civil works, carrying its previous experience to it and particularly to the field of drilling.
Without giving up its original activities, the company has focused its drilling efforts in pipe jacking (microtunneling), mainly for urban sanitation networks. When performing these delicate works, the company has proved itself highly competent in both quality and safety of execution.
All this development began in late 2001 with the purchase of a state-of-the-art HERRENKNECHT AVN 1200 T microtunneling machine. In the following years (2003 to 2005) two pieces of equipment with the same characteristics were purchased (AVN 1200 T from the same manufacturer). During the same period, two DN 1400 and DN 1500 extension kits were added, allowing the work with internal diameters between 1200 and 1500 mm (equivalent to 1500 – 1780 mm external).
In July 2008 a fourth HERRENKNECHT microtunneling machine was added for concrete pipes with a DN1800 internal diameter (external diameter 2200mm), as well as a DN2000 extension kit (external diameter 2420 mm).
And in 2011 all this equipment was completed with a AVN 600 unit from the same brand for OD 775 jacked pipes.
This constant equipment growth was linked to a constant, gradual crew training under a policy of bonding, retention and responsibility. GEOSA currently has enough human and material resources to carry out 5000- 6000 m/year in microtunneling, with a usable diameter ranging from 600 to 2000 mm.

Since February 28, 2006 and indefinitely, DESARROLLOS GEOLÓGICOS, S.A. has the following rating in Spain as a STATE COTRACTOR:
Group: A Subgroup: 04 Category: F